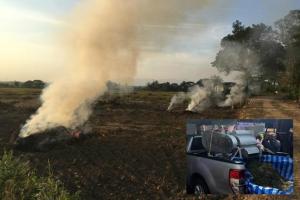 Despite the cool weather, the period between late January to March is not a pleasant time for villagers in Lampang and the other northern provinces. It is the time that haze – caused by the swathes of smoke from forest fires and the burning of agricultural waste – blankets the region.

Haze is pollution, irritation, and also is severely damaging to health. Last year, schools in several northern provinces needed to close temporarily and hospitals saw a rise in patients with respiratory problems – 55,000  in Chiang Mai alone. Haze also hurts tourism and related-businesses, while flights to Chiang Mai sometimes faced delays and even cancellation due to poor visibility.

The solution to the haze problem is easier said than done. Forcing farmers to stop clearing their land also means stopping them from starting the new growing season. Hence, all residents can do really is brace themselves for the haze with protectivemasks or, if possible, move away from the area temporarily.

But for Boonkoom Boonyasopath, energy engineer and member of the board of the Rotary Club Lampang, the solution may lie in a machine called the “Biomass Shredder”, which helps farmers get rid of farm waste without having to burn it.

Boonkoom Boonyasopath the energy engineer and board member of Rotary Club Lampang who invented the ‘biomass shredder’ to reduce open burning in farm area.

“Like you and I, farmers do not want to burn agricultural waste because they too need to inhale the smoke. But they don’t have a choice,” said Boonkoom, who’s also a founder of BKE Combustion Controls, a company that exports industrialcombustion machines.

“Disposing farm waste by moving it means huge logistic costs. So the machine has been conceived to remove this barrier and to help farmers deal with waste efficiently and in an environmentally-friendly way.”

Choked with smoke, Boonkoom last year walked around in his factory workshop and cranked up some tools. And he came up with the shredding machine.

Made up of a motor and 50 thick, sharp blades, the machine – which costs around 100,000 baht to make – can be put on a pickup truck and put on any piece of farm land or in a mountainous forest.

“I am an energy engineer by profession. Seeing farm waste being burnt is upsetting as we know it can be reused as fuel and fertilisers.”

He believes the machine can change the behaviour of farmers. “Just imagine if every farming community in the north was using this machine. It would reducethe large-scale open-air burning, with the farm waste being converted into organicfertilisers or soil nourishers,” says Boonkoom, who decided not to patent the machine and open up the technology for any individuals or organisations to develop further.

The machine is funded by a 181,000 baht donation from the Rotary Club Lampang, whose mission is to help the province solve the haze problem.

“The technology is not innovative at all. I just made the machine portable and practical to use in small farms,” said Boonkoom.

The Biomass Shredder, which weighs only 120 kilogrammes, can shred three tonnes of agricultural waste per day and costs only 100 baht for diesel fuel. That is much more affordable and attractive compared to the cost of hauling waste from farms to sell to biomass energy plants, or disposing it outside. It costs at least 2,000 baht a trip to hire a 10-tonne truck to dispose four tonnes of farm waste.

The Rotary Club Lampang is planning to donate two machines to nearby communities this weekend.

The club is holding an event on Jan 24 at Wat Tah Kua Temple in Muang district to hand out the machines to the communities.