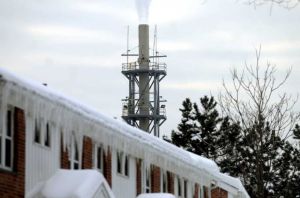 A long-time hazardous waste kiln in Cohoes would have to cut mercury and other pollution spilled into the Mohawk River and a stream that feeds the Hudson River, under a proposed new water pollution permit from the state Department of Environmental Conservation.

Mercury is a potent neurotoxin, and is especially dangerous for children and fetuses. Most exposure to mercury comes from eating fish contaminated with mercury.

For decades, Norlite has burned a mixture of hazardous wastes in high-temperature kilns at its Route 32 plant in Cohoes to process a form of crushed stone, called aggregate. Treated waste water from the plant’s boilers and pollution control equipment is discharged into the Mohawk, while stormwater and water from the quarry are discharged into the Salt Kill, a small tributary of the Hudson River.

On Wednesday, DEC released a draft water pollution permit for Norlite to replace a permit that expired in February 2007, according to a DEC Industrial SPDES Permit Fact Sheet. Norlite had first applied for a new permit in September 2007, but that application was suspended in January 2008.

Norlite applied for a new permit again in July 2009, and then filed a “renewal request” in July 2011, according to the DEC fact sheet.

That application was again suspended in August 2011. Norlite has been able to continue operations under the 2007 permit under the State Administrative Procedures Act.

Now, DEC is initiating a water pollution permit for Norlite. Regional DEC officials could not provide further information on the history of fines or penalties assessed against Norlite for water pollution violations, if any.

The permit also sets new discharge limits on such other toxic metals as cadmium, chromium, lead, copper, nickel, zinc, arsenic, barium, iron, and lead, as well as limits on chlorine and ammonia. It would require Norlite to begin a “mercury minimization program,” according to the fact sheet, which did not describe how that would be done.

Also, the company would have to run a dye test along one of the pipes that discharges into the Mohawk to “verify outfall location and conduct a mixing zone analysis.”

A Norlite spokesman offered a statement: “Like all holders of NYS issued SPDES permits, we are reviewing the draft sent to us by DEC. We will be responding to their draft within the statutorily required timeframe.”

The city of Cohoes draws public drinking water from the Mohawk. A call for comment to Cohoes Mayor Shawn Morse was not returned.

The 250-acre Norlite plant is one of only two in the country that make aggregate by burning liquid hazardous waste in kilns at more than 2,000 degrees Fahrenheit that heat and expand shale rock, which is later used in road and building construction. Neighbors of the plant have long complained about unusual odors and accumulations of grit.

Norlite is paid by industrial customers from as far away as Ohio, Maine, Maryland and Delaware that truck in waste, which is pumped into storage tanks. The waste is then blended before being piped to burners in two kilns, which date to the mid-1950s.

DEC is accepting public comments on the proposed water pollution permit through Feb. 19 to Teresa Diehsner, NYSDEC Headquarters, 625 Broadway, Albany, NY 12233; or (518) 402-9167; or DEPPermitting@dec.ny.gov. Those seeking access to draft permit documents should also use the above contact information.

The plant has a history of environmental violations. In September 2014 Norlite was hit with a nearly $30,000 DEC fine for several, including a pungent chemical release the previous summer.

During a March 2012 inspection of the plant, DEC investigators also found that Norlite had violated a 2007 state air pollution permit by not updating a 6-year-old “best management practice” plan on plant operations and an 11-year-old plan on managing dust from the stone quarry and aggregate-manufactur-ing operation.

In 2011, the plant was purchased by Tradebe Environmental Services LLC, an affiliate of Spanish conglomerate Tradebe, which operates hazardous and non-hazardous waste treatment and recycling facilities in the U.S., Spain, France and the United Kingdom.

In 2010, DEC hit the plant’s previous owners with a $90,000 fine for 62 pollution violations under the U.S. Clean Air Act for burning an improper mix of hazardous waste between November 2008 and April 2009. As part of that settlement, the company agreed to repair its kilns.