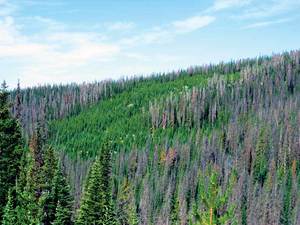 Managing invasive insects and disease requires prevention and suppression, but a one-size-fits-all strategy is misguided. Instead, what may have potential is an option tailored to individual forest types and site conditions, whereby a single action is used to achieve multiple objectives: specifically, active forest management to improve ecosystem functionality, lower fire risks, and generate woody biomass for innovative purposes.

Active forest management is a silvicultural approach used to reduce stand densities, increase tree diameters and improve forests’ resistance to drought and fire. Particularly useful in dry forests such as those of the Inland Northwest, active forest management can help reestablish forest composition, old forest structures and critical habitat. In so doing, large amounts of woody biomass are often created but underutilized. Organized to address this issue was the Bioenergy Alliance Network of the Rockies, which is funded with a USDA National Institute of Food and Agriculture grant.

Launched in 2013, BANR is one of seven coordinated agricultural projects funded by the U.S. Department of Agriculture, National Institute of Food and Agriculture. The NIFA Bioeconomy-Bioenergy-Bioproduct Program sponsors research and development on national energy security, and encourages private investment in the emerging bioeconomy sectors of biofuels, biopower and other biobased products. NIFA pursues its vision through partnerships with federal agencies, private industry and academia.

BANR is a multidisciplinary research consortium represented by the U.S. Forest Service, the renewable fuels industry, and land-grant universities in the Inland Northwest region. Its objectives are to investigate the social, economic, and environmental implications of using woody biomass to produce renewable biofuels and other biobased products, and provide the scientific underpinnings necessary to support a regional bioenergy industry.

Because down and dead woody biomass is vital to most biotic processes in forest ecosystems, the scientific community is divided on using it to produce bioenergy. Only in recent decades have the ecologic contributions of woody biomass to wildlife habitat, nutrient cycling and carbon storage become better understood. Biomass supplies are plentiful, but concerns are that a thriving bioenergy market could result in overuse detrimental to soil nutrients and site productivity, especially in the arid, Inland Northwest where biomass reduction occurs endemically.

Proponents claim that using woody biomass as a bioenergy feedstock will reduce dependence on fossil fuels, the effects of climate change and wildfire. Skeptics dismiss the notion as unreliable and outdated. Social opposition to biomass utilization has complicated forest management in the western U.S., where federal landownership is high. However, use of the material to produce thermal energy at relatively small scales has gained popularity among educational institutions.

In 1993, the University of Idaho converted its heating system from natural gas to steam. Wood chips and hog fuel sourced within a 30-mile radius of the Moscow, Idaho, campus are used to feed a biomass-fired boiler that heats more than 60 campus buildings, saving the university $1.5 million per year compared to natural gas. However, as scale increases, so do costs, especially those involving transportation.

An operation in Wisconsin that converted from coal to woody biomass in 2008 recently closed due to a combination of decreased value of renewable energy and increasing transportation costs. Biomass sources in the Inland Northwest are often located far from facilities that convert wood into energy. Increased bioenergy demand could dilute transportation cost per unit volume; if not, change is unexpected.

This does not mean woody biomass cannot be produced cost-effectively by forest operations. The U.S. Forest Service identified 5.7 million hectares of national forest land in 12 western states as capable of “paying for themselves.” Over two-thirds of these lands are in California, Idaho and Montana, and more than 50 percent of the woody biomass harvested would come from trees equal to or greater than 7 inches in diameter at chest height.

In 2012, the Mountain Pine Beetle Response Project on the Black Hills National Forest in western South Dakota and northeastern Wyoming began demonstrating woody biomass can be harvested at or above its break-even price across large landscapes. Utilizing active forest management techniques, 50,000 hectares will be thinned to reduce stand densities and improve forests’ resilience to insect infestations, primarily the mountain pine beetle (Dendroctonus ponderosae) linked to forest mortality on 9.3 million hectares of national forest land since 2000.1 Supporting the PBR Project are several million dollars provided by state and county governments and nongovernmental organizations.

Many scientists agree bioenergy derived from woody biomass can be produced sustainably without risking our existing energy system. Improvements in manufacturing technologies could further strengthen woody biomass’s market competitiveness, helping it establish a niche among other forms of raw material used for renewable energy. However, biomass supplies, typically disaggregated an uncertain, must be guaranteed if businesses are to invest. Forest restoration projects on national forest lands in Idaho and Montana are capable of yielding enormous volumes of woody biomass, but it is unclear in a climate of shrinking federal budgets whether the financial and human resources needed to undertake such projects will be available.

Any new form of energy production system that lacks the elaborate networks of its predecessor will operate initially at a disadvantage.2 Before the new system can become competitive, disadvantages must be overcome and duplicate infrastructure created. Successful development of bioenergy from woody biomass will not be an exception as 20 years or longer will be required to recover capital costs alone.3

According to the U.S. DOE, 2 percent of energy consumed in 2010 supplied by wood and wood-derived fuels will have risen to 9 percent by 2030, more than quadrupling wood fuels usage. On the other hand, the U.S. EIA estimates the country has recoverable reserves of at least 36 billion barrels of petroleum, 338 trillion cubic feet of natural gas, and enough coal to last for centuries. Given the current ready availability and price of fossil fuels, large-scale expansion of bioenergy from woody biomass is infeasible economically.

If forest restoration projects in the Inland Northwest region were to become major suppliers of woody biomass for bioenergy, government subsidies in the form of tax credits, loan guarantees or other types of financial aid will be essential. Otherwise, the cost to harvest, collect, and transport the material could make its recovery from forest operations more expensive than the resulting bioenergy benefit.