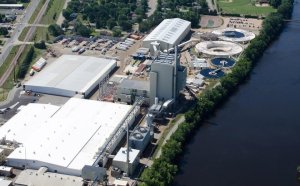 The plummeting price of natural gas and future environmental regulations are making utilities do things that were practically unheard of years ago, from shutting down nuclear plants to turning to natural gas for a variety of fuels in power plants.

Following the lead of Dominion Resources Inc., which shut down the Kewaunee Power Station nuclear power plant in Wisconsin three years ago, Chicago utility Exelon Corp. announced plans to shutter two Illinois nuclear plants early — unless the Illinois lawmakers agree to concessions that would allow the plants to be more cost-effective.

The moves are being driven by prices in the wholesale power market, including both the low cost of natural gas and the growing number of wind farms. Low-cost wind provides one-third of the electricity consumed in Iowa.

In Wisconsin, the price of natural gas is so low that it now would be more cost-effective to burn that fossil fuel instead of wood and sawdust at the renewable biomass power plant that We Energies opened several years ago in north-central Wisconsin.

We Energies notified state regulators this month that it plans to burn natural gas on a pilot basis for up to three months this summer as a way to trim the costs utility customers have been bearing for the biomass project.

“It was our idea to take a look at this as a possibility to help lower costs for our customers while maintaining a reliable supply of steam to Domtar,” which operates a paper mill served by the plant, said Brian Manthey, a We Energies spokesman.

In another move, We Energies and its sister utility, Wisconsin Public Service, plan to test the burning of natural gas inside coal boilers from Kenosha and Oak Creek to Green Bay and Wausau. The tests are designed to see if burning less coal in the plants will help the utility comply with the federal Clean Power Plan and other air pollution regulations.

The state Department of Natural Resources in May granted exemptions from air pollution permits for the two utilities to conduct the tests. “Approval for the request was straightforward, due to natural gas being an inherently cleaner fuel than coal to burn,” said Andrew Savagian, a DNR spokesman.

Burning natural gas inside coal boilers is one of the potential compliance strategies that the Environmental Protection Agency identified for utilities to comply with the federal Clean Power Plan, the Obama administration initiative that aims to trim emissions of heat-trapping gases linked to climate change.

Those rules are in limbo because of court challenges led by the coal industry as well as coal-reliant states including Wisconsin, where Gov. Scott Walker barred state agencies from taking steps to implement the plan in light of a Supreme Court action that has so far blocked the rules from taking effect.

Manthey said the We Energies tests of burning natural gas would help it comply with multiple regulations, including a rule finalized last year that’s designed to limit emissions of other air pollutants from coal plants.

Meanwhile, the biomass announcement drew reactions that fell into several camps — from “Makes sense, gas is cheap” and “What — natural gas? That’s not renewable!” to “That plant should never have been built.”

Michael Vickerman, senior policy director at Renew Wisconsin, said the $300 million power plant didn’t make economic sense when it was first proposed, given that We Energies had less costly options for its renewable power supply available. Those included buying renewable credits from other utilities or adding less costly wind power to its portfolio.

“We know how pricey biomass has been. When the Public Service Commission released its recent report updating the economic impacts from renewables, biomass apparently cost 17 cents a kilowatt-hour,” Vickerman said. That compared with less than 6 cents for wind power, the same report said.

Kurt Runzler, acting executive director at the Citizens’ Utility Board, said it’s clear the plant is too expensive, and argues We Energies customers shouldn’t have to pay for the facility on their electric bills.

“The economics of this $305 million plant never penciled out, especially from a ratepayer perspective,” Runzler said. “It never has been needed to serve We Energies’ customers, and the little bit of energy it is actually producing is not cost-effective.”

READ MORE at The Journal Sentinel