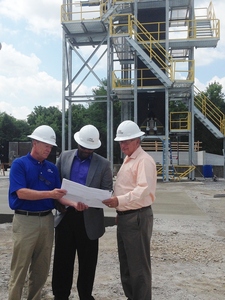 Work is progressing at the city of Lebanon, Tennessee, waste-to-energy plant, and Field Rep. Evann Freeman from Sen. Lamar Alexander’s office recently visited the site to check in on progress.

The waste gasification plant was designed and is being built by PHG Energy, which constructed a similar plant in Covington, Tennessee. At the time of Freeman’s visit, construction on the support tower was underway, and completion of the project remains on track to allow for an October commissioning.

The biomass gasification plant will deploy what PHG Energy believes will be the world’s largest downdraft gasifier, eventually converting as much as 64 tons per day of wood waste, sewer sludge and used tires into up to 400 kilowatts of electricity for use at Lebanon’s waste-water treatment plant.