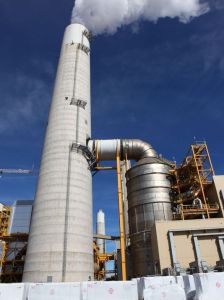 An Arizona water and power utility is conducting an experiment to add forest-thinning debris to coal burned by an electricity-generating plant, hoping to make thinning more economical to help avoid devastating wildfires producing runoff that would contaminate reservoirs.

Klawitter said SRP then will study costs and other data collected during the planned biomass burns before deciding whether to using forest debris to augment coal as a fuel source on a regular basis.

“This test is all about a market-driven solution to forest restoration in northern Arizona,” Klawitter said.

The forest debris used in Wednesday’s test burn was chipped from cuttings from an existing thinning project on state land near Flagstaff. Several state agencies, including the Land and Forestry departments, are partnering with SRP in the project, which is partly federally funded.