“We can win this” was the message from Mike Ewall, founder and director of the Energy Justice Network, to about 60 residents of Muncy who attended a meeting organized by the group opposing the proposed waste to fuel project in the borough.

Ewall, an environmental lawyer, has been working with the “Stop the Muncy Incinerator” group in its effort to keep Delta Thermal Energy (DTE) Inc. from locating its plant in the former Andritz building.

END_OF_DOCUMENT_TOKEN_TO_BE_REPLACED

The Muncy School Board voted 7-1 on Monday to adopt a resolution stating the board wishes to publicly oppose the waste-to-energy plant.

The plant, which has been proposed by Delta Thermo Energy Inc., is to be located at 100 Sherman St.

Skaluba said Delta Thermo Energy has submitted a zoning application with the borough of Muncy.

END_OF_DOCUMENT_TOKEN_TO_BE_REPLACED 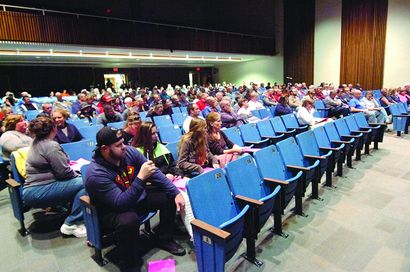 The council had to meet at the Muncy High School auditorium to accommodate the present at the meeting. Last week’s meeting at borough hall was suspended because of the overflow of people wanting to get into the meeting.

All those who spoke Tuesday were against the plant, and by the cheers and applause of agreement with the comments, the audience also seemed to be against it.

“Why would Muncy want to be a Guinea pig for experimental technology?” was one of many questions asked.

END_OF_DOCUMENT_TOKEN_TO_BE_REPLACED 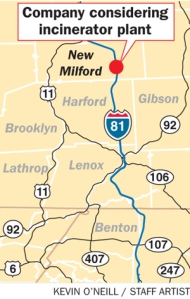 Armed security guards stood at both sides of the room.

Township supervisors were cordoned off from the sizable crowd. Not 10 minutes into the meeting, the first disgruntled audience member walked out.

This is otherwise peaceful Susquehanna County, a rural outpost in northeast Pennsylvania where few things appear to rile its 42,000 residents.

In this Endless Mountains region of Pennsylvania, the neighborly feel has taken an ugly turn as reports of a proposed industrial incinerator on a 114-acre plot just east of Interstate 81 off the Gibson exit put some residents in a panic.

Now, emotions are clearly pitched. Tempers flare. Residents are on edge. And details on this potentially landscape-changing project are few.

END_OF_DOCUMENT_TOKEN_TO_BE_REPLACED

People in the northern tier are asking burning questions. The landscape of the New Milford area, specifically the land off Interstate 81 at the Gibson exit, may soon change. There’s talk of an incinerator being build there.

More than 150 people poured into First United Methodist Church in New Milford Tuesday evening wanting to know more about what may be built and what may be burned. Many oppose the plan, saying similar businesses have tried to encroach on the area for years. Hugh Coombs, of Hallstead, says “I’m a former president of rescue, the environmental group that kicked out or kept out 13 major polluters that wanted to make a garbage can out of our county.”

END_OF_DOCUMENT_TOKEN_TO_BE_REPLACED

A developer has sent document indicating plans for an incinerator to process hazardous industrial waste in Susquehanna County, Pennsylvania, a report from the Scranton Times-Tribune says. Officials say that discussions for the project are in the early stages and it’s all speculation at this time.

According to the Times-Tribune, an April 26 report states the construction on an industrial park and incinerator could being in 2018, but the project needs state and local approval.

The county had called for industrial counties to consider its area as a possibility for business, and a group of developers called Tyler Industrial Park expressed interest. Another unspecified group of investors is considering whether the location, in New Milford Township, Pennsylvania, is appropriate for a waste incinerator.

Who cares about incinerator ash?

Well, the Lancaster County Solid Waste Management Authority for one. The authority hopes to launch a $13 million recycling project that would recover tiny bits of gold, silver, aluminum, copper and zinc from the 165,000 tons of ash from waste burned annually in incinerators in Lancaster and Harrisburg.

The project — one of the first in the United States — could mean the recovery of about 7,000 tons of ferrous and non-ferrous metals a year, netting perhaps $1.7 million for the authority.

It also would increase the county’s recycling rate and slightly increase available space in the Frey Farm Landfill in Manor Township.

Thousands of tons of valuable metals are being landfilled every year,” said James Warner, the authority’s chief executive officer.

END_OF_DOCUMENT_TOKEN_TO_BE_REPLACED 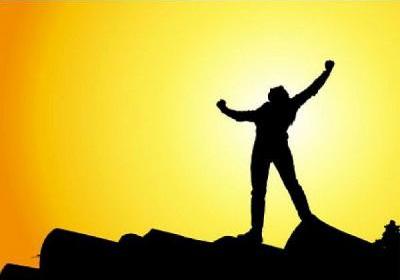 – by Allentown Residents for Clean Air, Stop the Burn

The City of Allentown is pulling out of the contract with Delta Thermo Energy.

This news surely spells the death of the experimental trash and sewage sludge incinerator that threatens Allentown.

We also have an ongoing lawsuit to get the Allentown Clean Air Ordinance on the ballot, so that voters can adopt a law protecting the city against incinerator pollution from any company in the future. This is also critical, since the case will affect whether local governments anywhere in the state can adopt their own clean air laws.

Allentown can breathe easy for now, but let’s not go to sleep. This isn’t over yet.

If you can help give back, your donations are much needed and appreciated, and will help ensure that this victory is final and that other communities also get the support they need.