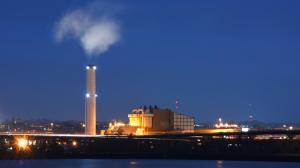 The New York State Assembly failed to pass A11214, meaning efforts to advance this proposed law are effectively stalled until the legislature returns for regular session in 2019. The last action on this bill was unanimous approval from the Assembly Ways and Means committee on June 19.

Circular enerG heralded this result and pushed back in a detailed statement, calling the bill’s claims “science fiction” and “bogus.”

END_OF_DOCUMENT_TOKEN_TO_BE_REPLACED

Posted on December 25, 2017 by TheBiomassMonitor 3 comments

A trash incinerator in Southwest Baltimore is the city’s largest single source of air pollution. But a state law has nonetheless allowed it to collect roughly $10 million in subsidies over the past six years through a program intended to promote green energy.

Few commuters who pass the imposing white smokestack on Interstate 95 have any idea that the plant burns their household waste, that their electric bills help to maintain it, or that it releases thousands of pounds of greenhouse gases and toxic substances — carbon dioxide, hydrochloric acid, formaldehyde among them — into the air every year.

END_OF_DOCUMENT_TOKEN_TO_BE_REPLACED

“We can win this” was the message from Mike Ewall, founder and director of the Energy Justice Network, to about 60 residents of Muncy who attended a meeting organized by the group opposing the proposed waste to fuel project in the borough.

Ewall, an environmental lawyer, has been working with the “Stop the Muncy Incinerator” group in its effort to keep Delta Thermal Energy (DTE) Inc. from locating its plant in the former Andritz building.

END_OF_DOCUMENT_TOKEN_TO_BE_REPLACED

Alford, a former state legislator and member of the University System Board of Regents, made a first pitch of the program to the Augusta Commission on Tuesday. His company is Allied Energy Services, which worked with Augusta on a recent solar project.

END_OF_DOCUMENT_TOKEN_TO_BE_REPLACED

The waste to energy (WTE) sector is not huge, but it is showing signs of growing.

This week, New Jersey moved toward joining the ranks of states that require food waste to be utilized as an energy source. The rationale for the requirement is two-fold: Rotting food releases methane, which is a harmful greenhouse gas. Transitioning the material to energy would help alleviate that problem. And in addition to addressing the methane issue, the energy that is produced reduces reliance on fossil fuels.

END_OF_DOCUMENT_TOKEN_TO_BE_REPLACED

The Detroit incinerator, long controversial for its burning of the city’s waste, is being targeted by a lawsuit that claims the facility repeatedly fails to meet safe air emission standards.

Officials with the Great Lakes Environmental Law Center filed a notice of intent to sue incinerator operator Detroit Renewable Power. Like previous owners of the facility, the company takes in thousands of tons of trash each day for incineration.

The incineration produces steam and electricity that Detroit Renewable Power sells to DTE Energy. The process also produces air emissions that are considered harmful to the public.

END_OF_DOCUMENT_TOKEN_TO_BE_REPLACED

Glenn County, CA Board to Decide on Trash Incinerator

The Glenn County Board of Supervisors heard an appeal today from opponents of a proposed waste-to-energy plant near Orland.

Both supporters and opponents of the ‘Glenn County Solid Waste Conversion Facility were making sure their voices were being heard by the board today.

The hearing comes a month after planning commissioners gave the green light for the proposed project east of Orland.

The project site is located on eight acres bordered by highway 32 to the north and Stony Creek to the south.

Many opponents in attendance today were from the stony creek area. Opponents complain the project will create too much truck traffic for the area and threaten the local aquifer, among many other concerns. END_OF_DOCUMENT_TOKEN_TO_BE_REPLACED

A demonstration of a $6.8 million Air Force waste-to-energy (WTE) project at Joint Base Pearl Harbor in Hawaii will showcase how gasification technology can convert 10 tons of waste per day into electricity.

The system has completed initial testing, and following more trials will generate liquid jet fuel from waste. Phase 1 of a microgrid project late this year will incorporate a gasifier.

END_OF_DOCUMENT_TOKEN_TO_BE_REPLACED

The Arizona Supreme Court has upheld the earlier decision of Arizona state utility regulators, ruling that it is acceptable for Mohave Electric Cooperative to burn trash to generate power at a facility proposed by Reclamation Power Group plant near Surprise.

The Arizona Corporation Commission had given Mohave Electric Cooperative the go-ahead five years ago, which fueled heated debate, particularly from the Sierra Club who filed a lawsuit stating that energy from burned trash is not renewable. But the appellate judges left the call to the Commission, and now the highest court’s final rule opens the door for Mohave to meet its renewable energy mandate through incineration. It also opens the door for Reclamation Power Plant to charge Mohave to absorb some of the cost and build the facility. Mohave in turn can impose a surcharge on its 39,000 customers to recoup some of its cost to deliver this alternative energy source.

The utility company would accept 500 tons of trash a day, recycle 25% of it, and burn what’s left to generate electricity.